One of the nice things about blogging is you never know what’s going to happen next. Like the day I received an e-mail out of the blue from Roger von Oech.

I first came across Roger’s work about 10 years ago, when I read A Whack on the Side of the Head, a mind-bending book on creative thinking that became an instant favourite, and which I’ve since plundered many times for ideas to use with clients. Along with his follow-up A Kick in the Seat of the Pants, it’s had a significant influence on my creative writing and coaching. Roger is one of the first authors I turn to when I’m looking for inspiration, or when I’m recommending books to clients. 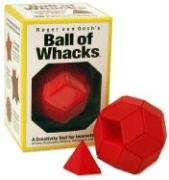 So you can imagine my surprise when I checked my e-mail one day to see the name ‘Roger von Oech’ in the ‘From’ field. At first I thought there was something wrong with my e-mail software, or that it was the work of an ingenious spammer. But the e-mail looked genuine enough – Roger said he’d noticed some traffic coming from my blog to his and had stopped by to check out the source. I’d forgotten that I’d added his blog to my blogroll, which explained the occasion of his visit – but I was still surprised and touched that such a distinguished author had made the effort to get in touch with me, and say nice things about my writing on creativity! It was a little surreal.

On reflection, it suggested a genuine curiosity and humility in the author, who said he was relatively new to blogging and checking things out. Over the next few weeks I noticed Roger’s comments springing up on my blog and others I was reading – he seemed to be throwing himself wholeheartedly into the blogging adventure, with all the enthusiasm for experimentation and learning that shines through his books. A few days later, Roger asked for a shipping address and I was delighted to receive two of his new Ball of Whacks creativity toys. What is the Ball of Whacks? It’s hard to describe – I could begin by saying it’s a collection of magnetic plastic shapes that can be arranged to form a variety of polyhedra, but that would sound a little dry. Or I could say it’s a kind of three-dimensional puzzle or jigsaw, but that’s not quite accurate as there’s no ‘right answer’ to solve the puzzle, and you never arrive at a finished picture. There’s always another shape you can make out of it – whatever shape you assemble from the pieces, there’s always a temptation to start tinkering with it, to see what happens if you take something from the edges and put it in the centre, or vice versa…

If pushed, I would probably say it’s a three-dimensional kaleidoscope that you explore with your fingers as much as your eyes. I get the same feeling from playing with it that I used to get from playing with my toy kaleidoscope as a child – the same sense of absorption and wonder, tinged with something slightly disturbing about the relentless mathematical emergence and dissolution of the individual shapes. ‘Creativity’ can seem a fluffy, harmless kind of word, but one thing the kaleidoscope and the Ball of Whacks both suggest to me is that there is no creation without destruction, that the new is formed by dissolving and rearranging the old. The shifting geometry of the spiky stars, spheres, rings and chains that emerge from the Ball also puts me in mind of the “abnormal, non-Euclidean” geometry of the city in H.P. Lovecraft’s classic horror story The Call of Cthulhu. (Though these days even Cthulhu can be cuddly.)

Another story I was reminded of was the passage in Herman Hesse’s Steppenwolf where Harry sits down to play a marvellous chess game in which the pieces are the many different facets of his personality. The chess player says to him:

“The mistaken and unhappy notion that a man is an enduring unity is known to you. It is also known to you that man consists of a multitude of souls, of numerous selves… We demonstrate to anyone whose soul has fallen to pieces that he can rearrange these pieces of a previous self in what order her pleases, and so to attain to an endless multiplicity of moves in the game of life. As the playwright shapes a drama from a handful of characters, so do we from the pieces of the disintegrated self build up ever new groups, with ever new interplay and suspense, and new situations that are eternally inexhaustible. Look!”

Another important dimension of the Ball of Whacks is the way it engages the body as well as the mind – or rather, the way it reminds us that the body is the mind, that our mental and physical faculties are interdependent and indistinguishable at the biological level. As Roger writes in the handbook that accompanies the Ball:

A considerable portion of the brain is dedicated to hand-related functions… Because of this overlap between the sensori-motor and cognitive functions, working with our hands stimulates the brain.

This reminded me of a trip to the Science Museum as a boy – among the exhibits were two weird goblin-like creatures, illustrating the proportion of the neurological system devoted to sensation and motion in different parts of the body. As you can see from the illustrations via the sensation and motion links, the hands take up a large part of the brain’s resources on both counts – so stimulating the hands is a powerful way to stimulate the mind.

[youtube]pFkHZFKXTSY[/youtube]
Roger’s emphasis on thinking through the body also brought to mind the concept of bodymind in my friend John Eaton‘s development of Reverse Therapy. It was John who first suggested I read A Whack on the Side of the Head, and I know he’s very interested in the role of bodymind in creativity, and conscious of the need to keep ourselves physically stimulated if we want to be creative. This can be particularly difficult for those of us spending hours at the computer – there are so many digital distractions that after a while we can start to feel disconnected from physical reality. There are signs of a reaction against this even in the design of computers – e.g. the success of the Wii and creation of more tactile computers such as the PC for poets. And I’ve previously written that I started learning aikido a few months ago as a deliberate way to counterbalance all the time I’m spending at the PC.

One of the things I’ve been trying to do is to notice the signs of physical and mental fatigue that come from spending too long at the keyboard, and using these as cues to get up and recharge my batteries by engaging with the three-dimensional world around me. It could be 5 minutes of aikido exercises, a trip to the gym or something as mundane as washing the dishes, making a cup of tea or popping out to the corner shop for a pint of milk. And the Ball of Whacks is perfect for this kind of mini-break – I keep it within reach of the keyboard, sometimes sitting on the desk as a visual reminder that there’s a world outside the screen – sometimes I find my fingers reaching out for it before I’ve consciously realised I’m feeling in need of a break.

There’s something at once soothing and stimulating about playing with the ball – you can fall into a kind of reverie, absent-mindedly toying with the shapes and reassembling them. The ball has something of the suppleness of plasticine, as you can mould it into different forms, but the individual shapes remain smooth and hard to the touch. There’s also something of the Rubik’s cube about it – the feel and sound of the plastic shapes as they click into place – but none of the maddening frustration I used to feel when I realised I would never solve the cube. As a child I felt disempowered by the Rubik’s cube – you could either do it or you couldn’t, and I definitely couldn’t. But the Ball of Whacks is much more open-ended and forgiving – there’s never a right answer, just another combination to try.

So has it made me more creative? Well creativity is notoriously hard to measure – I can’t say I’ve had any blinding insights that I would attribute solely and directly to the Ball, but then I don’t think that’s Roger’s intention in creating it. By presenting us with such an open-ended, enigmatic, Sphinx-like toy, I think Roger is trying to suggest the playful and multifaceted nature of creativity. We can’t reduce the creative process to a single element such as the ‘Eureka moment’, the hard critical appraisal or the slog of execution, and we need to be constantly alive to the need for balance and variety, changing our perspective and making new connections.

For instance, before I sat down to write this piece this morning I would never have guessed that meditating on the Ball would bring to mind spammers, kaleidoscopes, the Science Museum, aikido, the Wii, washing the dishes, Cthulthu, Steppenwolf, the Rubik’s cube and the Sphinx – yet now I’ve listed them the connections seem obvious. So I would definitely say the Ball of Whacks has had a positive influence on my creativity. It sits in my room like an exotic starfish or extra-terrestrial imp, prompting me to pick it up and pull it to pieces so it can reassemble itself, all the while making new connections in my mind and body. I feel slightly different after playing with it – as if I’ve somehow rippled and come back together, like a reflection in water.

Well that’s my Ball of Whacks. But Roger sent me two, and I need to find a new home for the second one. Would you like it? If so, leave a comment on this post about the effect of the physical world on your creativity – whether a physical object, exercise, illness, the weather, etc. After a week I’ll choose a comment at random and send you the Ball.